I've been working on this project for over a year and it's close to fruition.  Of course, the pandemic kind of threw plans up in the air for a while.  I'm still hopeful to get these guys done this year -- and this is the concept art that started it all!

Edit: Photos of the actual sculpts are now up! 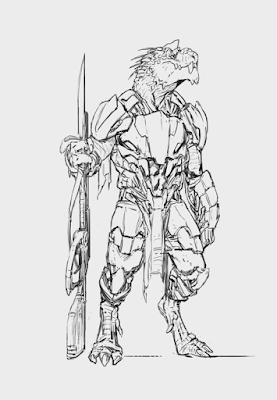 Posted by Nicholas Caldwell at 11:58 PM No comments:

How expensive is it to get into 3d printing?

Someone posed this question to me recently in the form of "this Kickstarter has neat model ships -- how expensive would it be to get a 3d printer and print them?"  Here was my answer, although I can boil it down to the last paragraph -- you aren't buying a 3d printer; you are buying a new hobby:

Email ThisBlogThis!Share to TwitterShare to FacebookShare to Pinterest
Labels: 3d-printing

Zombiesmith's Quar 15mm 2.0 Kickstarter is underway.  I've loved the Quar since I first came across them and their murderous little hearts.  I'll be using them for both Chain of Command and the Company level game that is being produced as part of the KS.  KS ends March 23 2020.

I love their vehicles and came up with this for the Creevin "Anfyr" tractor: "In my head-canon, in order for the Creevin to fire that big, off-center gun on the Anfyr tractor, they first put the turret in "neutral." When the gun fires, the whole turret spins around one entire revolution to absorb the recoil. This vertigo-inducing behavior can result in the crew staggering around and chundering for hours after an intense firefight. As a result, Creevin tankers are often referred to as "Drunken Dragoons" with varying degrees of respect depending on whether their posterior was just saved by one or if one just drove over the nice foxhole you just dug."
Posted by Nicholas Caldwell at 9:57 AM No comments:

Yep, the ghost pirates from Bones 4 sucked me in.  :-)  Here's my first model painted from the ginormous plastic pile that was delivered a couple of weeks ago.  Pretty good for me to get this painting table so quickly.   Oh, and my wife and I are aiming for "tabletop good enough" paint jobs for these, so I haven't done anything with the basing.  We have so many to get through we just want to put paint to plastic and get gaming with them! 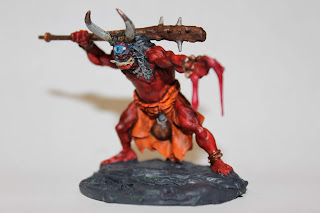 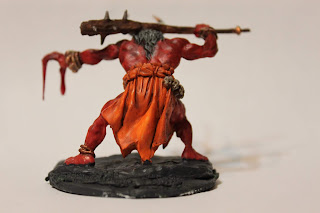 Posted by Nicholas Caldwell at 10:18 PM No comments:

I'm a huge fan of these Infinity Colored terrain pieces.  They have a nice retro-future look to them and most could be at home in fantasy and near-future as well as far future.  Looking forward to getting some good use out of them this year. 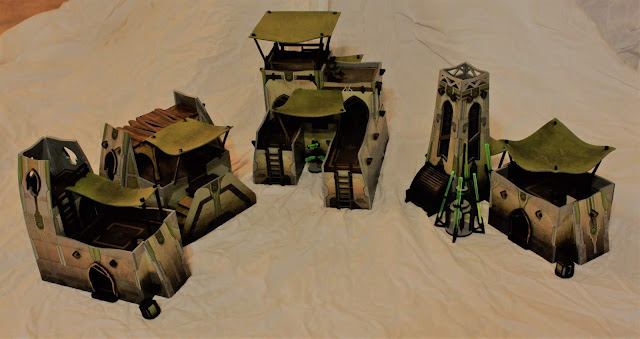 Posted by Nicholas Caldwell at 11:28 PM No comments:

Email ThisBlogThis!Share to TwitterShare to FacebookShare to Pinterest
Labels: Terrain

I'm a fan of Rick Priestly games and had a wonderful opportunity to chat with him at a GW Games Day in Baltimore.  In fact, he signed my WH40K softcover ("It's been a while since I've seen one of those!") and gave me a one-one-one demo of the system that would become Warmaster.

So when Warlord Games announced Rick's Warlords of Erewhon, I took the unusual step of pre-ordering it.  And I'm glad I did.  Why?  Because when I set up a simple 2 unit scenario to demo the games to my wife, it turned out to have a really interesting set of decisions.  Let's set the stage:

I put together a unit of 5 Roman Legionnaires using the Dwarf warrior stats.  My wife took her Amazons which actually do have stats from the Olympians army list.  I randomly put the units out and they turned out to be about 16" away from each other.

I drew the first order and realized that I couldn't charge her unit.  So I just moved it 5" closer -- this put me at a disadvantage as the only way that I could get my charge in first next turn would be to draw my order dice first.  My wife had a much more interesting choice.  She could either hope that she would draw the first order next turn or go on Ambush this turn and wait for my attack.  I would have gone for the Ambush but she chose to trust in luck.  Unfortunately my luck held out.

Turn 2, I drew the first order and charged in.   For this combat, we treated the Amazons as having spears and my Romans took a casualty on their charge in despite their high armor.  Then thanks to some abysmal rolling I ended up losing the combat and retreating.  In the following turn the Amazons were able to charge and auto-routed my Romans by getting more pin results.

And that was it - a very simple demo that left me wanting to play more.  I like the activation, the system is modern and clean with simple die rolls and simple modifiers.  My one complaint is that there is no insight into the points system.  I want to add the Shieldwall rule to my Romans but there's no advice on how to cost it.  It's a minor complaint, though.  [UPDATE: Points system has been published by Mr. Priestly)

All in all, a very solid set of rules and I'm looking forward to getting my skeletons finished and getting my goblins and orks to battle once more.  It's been a long time for those guys.
Posted by Nicholas Caldwell at 11:17 PM No comments:

This is becoming a theme, isn't it?  Well, a new baby (our second) coupled with some health woes kept me from returning to blogging.  I'm going to try to do better.  And I have good reason to -- Invasion:UFO is nearing completion and will be heading to Kickstarter along with at least 10 beautiful sculpts done by the talented Andrew May of Meridian Miniatures.  Final sculpts are done and I will soon have the first models off the molds.  In fact, I am looking for some professional painters to paint a few for the Kickstarter. Drop me a line if interested.

Posted by Nicholas Caldwell at 11:16 PM No comments: